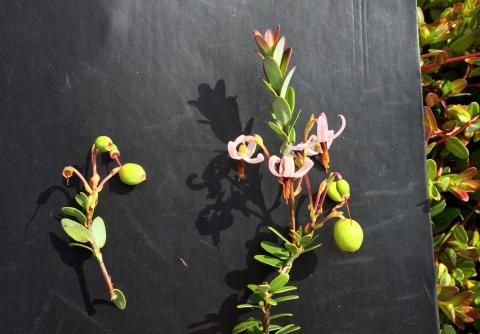 What is “Umbrella bloom”?  Normal spring growth of fruiting uprights includes both blooms and upright growth above the flowers.  Umbrella bloom is what they call it when the uprights flower, but there are no vegetative shoots.

At the Twilight Meeting in April, several growers mentioned that they were observing unusually high percentages of umbrella bloom in their bogs.  I've since collected data to try to quantify the umbrella bloom observastions and have seen bogs with as much as 60% umbrella bloom!

What causes umbrella bloom?  Why are we seeing more of it this year than in previous years? There are a number of possible causes:

1.      Frost damage.  Newly emerging vegetative shoots are very sensitive to frost and can easily be damaged if temperatures drop below 32 degrees, even for a short period of time.  Side shoots eventually develop, but production is reduced.

2.      Insufficient chilling hours.  Chilling hours are the total number of hours spent below 45°F and above 32°F. The influence on low chilling hours on cranberries has not been studied well.   The studies I’ve seen were done in the late 1960s – early 1970s.  Those studies did show a varietal difference, but there isn’t any data on low chilling hours and the new varieties we have today.   If you take a look at the graph below (Figure 1), you’ll see that the number of chilling hours we had (as recorded at the Bandon Agrimet station) was significantly lower than normal.

3.      Mite/insect damage. Tipworm is a new(ish) pest in Washington and British Columbia.  We haven’t seen it yet, but it’s another possibility. 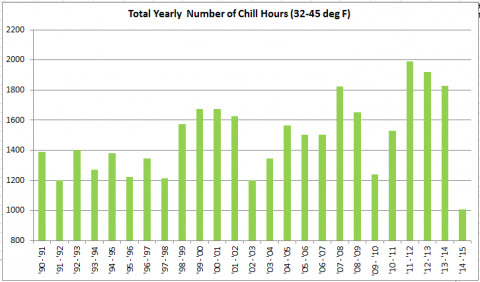 Bernadine Strik suggested that a warm fall might influence cranberry dormancy as well.  I looked at the number of chilling hours by month compared to a 22-year average (Figure 2).  You can see that yes, we did have much fewer chilling hours this fall (October) than ‘normal.’

I have visited several farms and collected data to try to get a better feel for what’s happening in the field.  I would expect that if chilling hours were the issue, I would see similar problems all across our growing region.  So far, that’s not what I’ve observed.  I’ve seen variation within a bog and between bogs … There are some bogs that have virtually 0 umbrella bloom, while others range from 30-60%.   Here’s a graph of the on-farm data we’ve collected so far.  Note the variation even within and between varieties.

The variety trials in Langlois have been a great source of information – we can look at varietal differences without worrying about variables such as location and management.  Scarlet Knight has, by far, the greatest percentage of umbrella bloom.  But in reality, most of the varieties in that particular location hovered around 20% … which is still a greater percentage that we would normally see in a year. 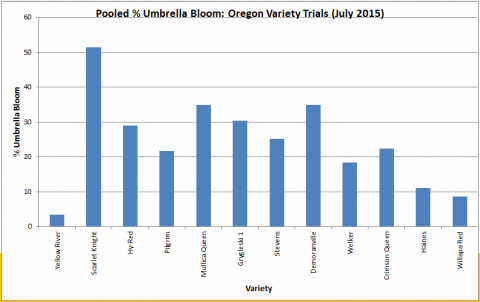 I’ll be working with a local farm this year and next to try to answer the production question.    Our plan is to mark umbrella bloom uprights, regular-fruiting uprights, and no-fruiting uprights and follow them through time and make observations relating to relative production.  We’re still in the planning stages, but it should be a helpful study, especially if we continue to have warmer winters.

I would LOVE to have more data on umbrella bloom, but it’s difficult to get out into the field as much as I’d like.  If you have the time and inclination, it would be fantastic if you could send me data from your farm!  The sampling couldn’t be simpler, and I’d keep it confidential.  I would do like I’ve done for other growers … assign your data a number on the graph (on the OCGA website under “Current Research”) and you can see how your farm rates to other farms in the area.

Here’s what you’d do:

Here’s an idea of how your paper might look after you've sampled a bog:

You can email your data to me at:  cassie.bouska@oregonstate.edu